We broadcast live - 2 hours a day, 5 days a week across 3 countries via 26 AM/FM affiliates with a listening audience of 100,000+ and we have the ability to run recorded advertisements on the syndicated radio network provided by American Freedom Radio.

We present an opportunity to reach an international audience at rates that can't be beaten!

Our websites are growing rapidly in visits with no signs of slowing down & it is now a great time to start supporting the show and connect with our audience on one of the hottest talk shows on the planet!

If you are interested in advertising on air or on our website please contact us through the above form.
Rates are extremely competitive and can be negotiated each month upon review of numbers you receive.
Email us!

Vinny Eastwood a.k.a. “MR News”
Vincent Eastwood, the Director and Founder of the company took a look at the main stream media and realized that investigative journalism is no longer the norm in New Zealand.

The New Zealand Herald in 1999 had more than 40 investigative journalists and today resembles a “gossip rag” not a newspaper.

Mr. Eastwood purchased his own video camera and started to interview, confront, cajole and make laugh various contacts within the Parliament, the Prime Minister, celebrities in the media and others. John Banks, John Key and Helen Clark are just a few of the dozens of public figures confronted by Mr. Eastwood.

Thirty Five per cent of the radio stations in New Zealand are owned and controlled by Clear Channel Communications (CC).
CC is the single largest owner of stations in America so most of the content imported into New Zealand is not original content produced here and does not represent the issues in the news here.

The motto of Vincent Eastwood and Guerilla Media Limited is “if the main stream media wonʼt do their job, letʼs replace them”.
Danny Romero, the founder and owner of American Freedom Radio heard Vinny Co-hosting another radio show and offered him an opportunity to host his own show.

On June 21, 2010 ,    “The Vinny Eastwood Show” launched on American Freedom radio on traditional radio & on the internet.
Within 90 days of the syndicated radio show launching Will Ryan, another independent media activist joined the show.

Globally there are over 150 Million Websites. To be in the top 250,000 is a great achievement and not easily accomplished. Here is the current ranking of American Freedom Radio for February 2011. 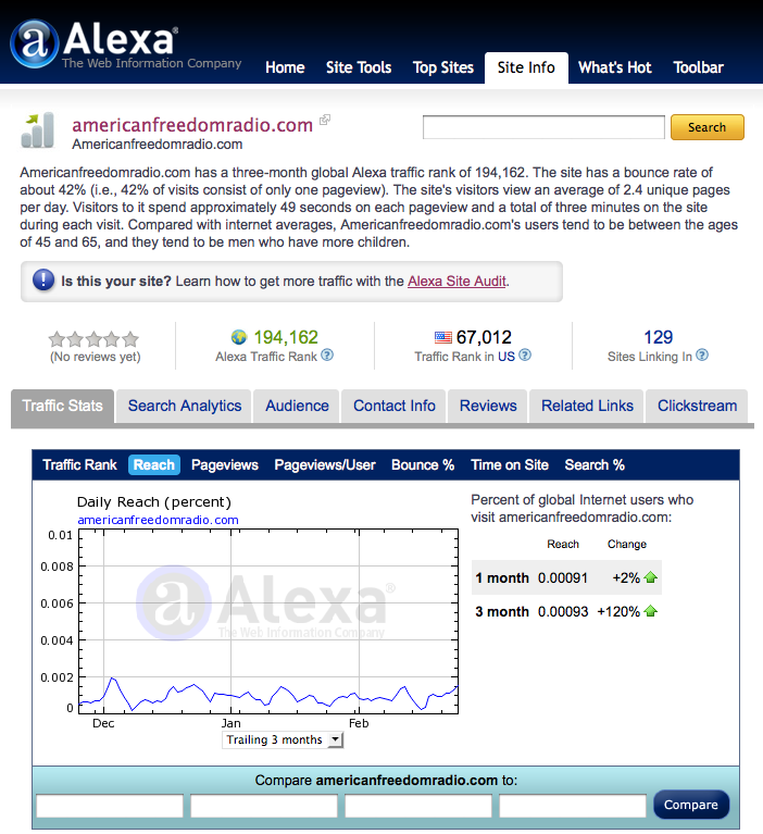 American Freedom Radio who syndicates and distributes The Vinny Eastwood Show is rated in the top 100,000 for America and in the top 200,000 World Wide.

Expansion Opportunities - As of February 2011, The Vinny Eastwood Show with Will Ryan has been on the air for eight months. The show cleared 2 New Zealand Affiliates, Rush 87.7 FM and Ifinity 87.7FM. The goal of the show is to continue to pick up additional affiliate stations and to expand in 2011 to 10 additional countries on traditional “terrestrial radio (TR).” In addition, the goal is to add additional stations through out 2011.

The issues on the show include:

If the media won't do their job, don't fight them, replace them.