American Freedom Radio is in the top 100,000 Sites In America & Growing Fast. Find out why!
The Truth:
It's offensive, it's outrageous and it's hilarious! Your daily dose of comedy and conspiracy, it's "the lighter side of genocide"
LIVE from the future and the future looks bright!

Bringing you top Activists, Researchers, Politicians, Journalists, Intelligence Agents, Artists, Radio Hosts, Musicians, Editors & business people.
If we want to understand what is going on in this world, go to the experts!

In a world full of madness and chaos, you've got to keep your sense of humour or you'll go friggin nuts! 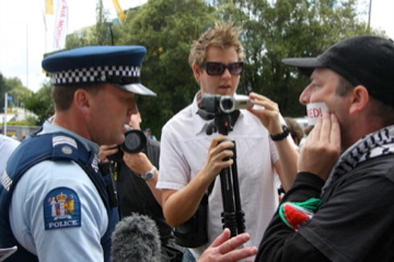 Vinny Eastwood
The Vinny Eastwood Show is not here to wake people up, it's here to help the many who should have their stories told.

With 1 rule, HAVE FUN!.
If they're having fun, the audience is having fun. Especially because  you will hear talk about the most serious and in some cases positively horrifying realities of our world, from all sides. Agree or disagree the intention is to just hear someone out, simply let those who have already done the research, deliver their conclusions as only they can mostly because Vinny doesn't like researching, but instead talks to the researchers.

Not only on air but in the streets! Right alongside protest leaders, fearless truth, but ridiculously funny. Armed with a camera, Vinny aka MR NEWS sets out to give real issues, real politicians, real celebrities and researchers, the coverage they deserve. With a different point of view that the mainstream media will either ignore or cut into soundbites that never reflect the reality with real information.

The same things that are happening in the USA are happening in New Zealand, that's why it's called The New WORLD Order, because no one on Earth can hide from it. So we have to face it with a smile, some courage and a sense of duty to prevent worse things from happening!

The show is about unity, truth, fun, laughter and giving people a platform.
They get archives published free online and on youtube. That way the next time someone asks them a question they can just send them a link! So it makes it easy to promote themselves. "Activists are generally quite modest people and would never go around shamelessly promoting themselves,  fortunately I was born without a sense of shame and there's nothing shameful about shameless self promotion.

Now through our joint-venture with American Freedom Radio we bring you A list  researchers and activists from around the world 5 days a week!

As Vinny always says:
"if the mainstream media won't do their job, don't fight, let's just replace them, because they're no longer relevant!"

"we should come together on the points we agree and those we don't we can leave for another time."